Last year, about this time, I was preparing for my first trip to Star Wars Weekend at Hollywood Studios (plus a few days more to visit all the parks) at Walt Disney World. Seeing as we are gearing up again with Star Wars Weekend and whether to go again or not I thought I would share with you why and why not think about taking advantage of these special days. I decided years ago that one day I wanted to take my husband (here on out known as “DH” or Disney Husband) there to experience the Dark Side. So, when he started talking gibberish about going to the beach for a vacation I quickly pulled out the big guns and mentioned Star Wars weekend at Disney. So, to Disney it was! We luckily were able to stay at Boardwalk Resorts while we enjoyed the boat access they have to not only Hollywood Studios but also EPCOT. We are not DVC owners, but we were able to reserve a one bedroom villa and with all that space we invited a good friend (“DBFF”or Disney Best Friend Forever haha!) to tag along as well and enjoy the trip.

A little background on my Star Wars knowledge (or lack thereof): I have no true recollection of watching any of the Star Wars Movies. I have a slight recall of being dressed as Princess Leia when I was quite young for Halloween and having to be convinced I was being dressed as a Princess…to make it all feel better to a young child. My husband says I saw a Star Wars movie with him in the last 10-12 years but I am thinking I slept through it because I have no recollection. Anyway, with that said I wish I had watched the movies prior to the weekend so I would know some of the characters but all in all as long as you know who Darth Vader is then you are doing good. 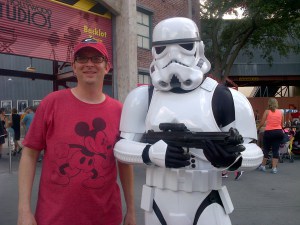 The Good: The best part of the whole Star Wars experience was the evening event called “Hyperspace Hoopla”. It was funny, entertaining, and well worth the time spent. The bad behavior of many at the event trying to sneak their kids up front and ending with a few confrontations with Disney Cast Members only added to the entertainment and calmed down once the show started.

The Bad: The Parade. Too many people and the route was not clearly marked. We were in a place roped off for a parade route but what really happened was the parade went down Hollywood Boulevard and then jumped on the stage that was positioned in front of the Sorceror’s Hat. So, we never really saw the parade and by the time it had all happened we could not get a view of the stage. All in all…it was a waste of time and many grumblings were heard by all.

The Dark Side: Actually there was no real “Dark Side” other than the kind you want (see pictures above!) Like almost everything Disney does this special event turned out really well. Everything was spread out to make it not takeover the entire park and so the lines were decent. We waited about 15 minutes for a picture with Darth Vader for my husband. The entire 15 minutes his interaction with the people was so funny (my favorite was when a little girl started hugging him and he really was not sure what to do).

The weekend had lots of activities, special merchandise (Darth Mall was the merchandise Hub) and plenty of fun. I loved seeing all the costumes the park visitors had on that day and learning more about the 501st Club that does the amazing costumes and does it all for charity.

Oh, and lastly, the cupcakes. Who does not want a Darth Vader cupcake? A chocolate and peanut butter extravaganza that was well worth the entire visit.

So, have you ever been to Star Wars Weekend at Hollywood Studios or any other Disney “special events”? Are you thinking of going this year? Let me know your favorite times at the parks in the comments below.