Join us this week as we continue to explore Epcot’s World Showcase, this time with a stop in Canada.  Listen to find out all the fun, food, and shopping you can find in this gorgeous little slice of our neighbor to the north.

In the final installment of our Drinking Around the World series we’ll be stopping by France, the UK and Canada! Make sure you check out Parts I and II for the best drinking around the world options in the rest of the world showcase.

First stop, France. Les Vins de France is the name of the kiosk where you’re going to head for the best alcoholic beverages in France. Unsurprisingly there are many choices available for wine by the glass at this location including reds, whites and at least one blush wine. However, most people actually skip the wine in France and instead opt for one of two of arguably the most popular drinks in all of Epcot: the Grey Goose Citron Lemonade Slush or the Grand Marnier & Grey Goose Orange Slush. Both are the perfect ice cold refreshing drink after a long walk around the world showcase at Epcot! 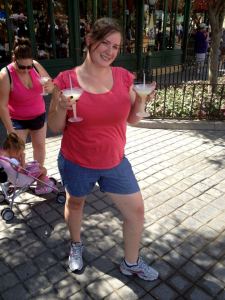 Our second to last stop on the Drinking Around the World tour is the UK pavillion. If you’re just looking for a quick stop you’re going to head to the Rose & Crown pub’s outdoor kiosk. There you will find three different types of beer: Bass, Stella Artois, and of course Guiness. There are also three types of hard cider at this location which would be my personal preference. If you want to spend more time you can reserve a seat inside the Rose & Crown for the option to order off their extensive list of beers or one of their mixed liquor drinks including the Welsh dragon which is made of orange and pineapple juices, Peach Schnapps, Melon Liqueur and Crème de Menthe. Yum! One other fun thing that the Rose & Crown pub does is mix beers. You can order pitchers of different beers mixed together including the Bumblebee which is a mix of Boddingtons and Guinness.

And finally, Canada. Now, unfortunately Canada doesn’t have very many choices but hey, by this point you may not care too much right? For the beer enthusiasts you can choose between Moosehead, Labatt or Molson beers. Recently there have been reports of a very highly rater beer called Le Fin du Monde also available in Canada. For the liquor lovers there is the option of a Torontopolitan which is made from vodka, chambord and cranberry and orange juices!

Your journey around the world is now complete! 11 countries down How do you feel? 😉