So, we woke up the next morning raring to go and so we went downstairs and got to indulge in the special, complimentary breakfast for Platinum members at the Hilton. It was

good, just the usual eggs, bacon, waffles, muffins, etc. It was good and easy and a nice perk. After that we packed up leisurely because although we had a port arrival time for around 10am we knew that was just “suggested” and we decided based on others info and reviews that to us it was more important to avoid long check in lines and waiting around for nothing. So, we planned it perfect for us! We drove over to Port Canaveral,
returned the rental car to Budget, shuttled over to the Fantasy, got baggage handlers, went through security, checked in the special Castaway Club line and walked right on to the boat. It actually went that easy without any hiccups. We boarded the ship around noon and discussed telling the person who took our last name to announce and welcome a few options as we had a few last names going so we thought about being the “Awesome” family or the “Disney” family but in the end we went with all of our last names…next time.

We had already decided to go to Enchanted Gardens for lunch. Everyone knows about Cabanas lunch but did you know Enchanted Gardens has a buffet on embarkation day? Well, they do and we did. Interesting enough when we boarded we asked a crew member where to go and he told us Enchanted Gardens was full and turning people away and over to Cabanas. We discussed amongst ourselves and decided to ask another crew member, who did say the same thing, but when we said what

would happen if we went anyway he said probably nothing! So, we went down and somehow lines were miscommunicated because it was only half full and no line. That was odd – I have no idea but clearly something got muddled. So, we were sat and went and had a great lunch with cold cuts, shrimp, salads, sides and yummy ice cream and lots of other desserts.

After lunch, we headed to find our staterooms and get our Castaway Club gifts. This was our second cruise, so first as a CC member. The gift was AMAZING and seriously high value. I not only used the tote the whole week but have used it for several quick overnights since home.

Also, we had brought our nice lanyard wallets we had gotten for the last cruise so we just switched out the lanyard so we could use our nice little key holder with a pocket but still have the CC lanyard. After, admiring our gifts my OCD husband insisted on unpacking and getting the luggage stored under the bed and everything in its place. I was glad we did 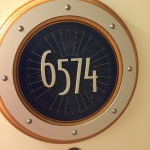 but it was hard not to skip that and run crazy over the ship doing more exciting things than unpacking.

We had a Verandah room and it was exactly like the last room on the Dream, though turned the other day. I love the staterooms on Disney because they have adequate space and it makes it much nicer!

deck of Meridian lounge, outside of Palo and Remy. They had the same area on the Dream and we enjoyed having cocktails there on the Dream at night and the servers on the Dream were fun and helpful so we looked forward to the same good times. We watched the ship sail off and enjoyed the beautiful weather and peace on the deck.

We went to “A Fantasy Come True” for the early show (since we had late dinner) and it was cute. It was a little “salesy” and we were a tad bit turned off at first but it got better and ended up being a cute show.

Dinner that night was at Enchanted Gardens, so since we already knew where we were going it was easy to get there! When we were seated there were already people at our table. What? On the Dream our party was our own table and it just did not occur to me that we would be seated with others. But, we were and though it was a little nervous and quiet at first it turned out great of course. They were very nice and we had a good time hearing about the different things they did and watching their teen son watch the clock to escape back to the teen club every night! So, food – yesssss! So, I skipped the appetizer that night and had a soup and salad because the Heirloom Tomato Soup is a must for me and the Romaine Wedge was also calling my name. I had for my entrée Slow Roasted Prime Rib: Thyme-roasted Vegetables, Double-baked Potato, Horseradish, and Natural Jus and it was amazing. I am not a huge Prime Rib fan and when it first came it was way too red for me so servers noted and brought me a bit more medium well version and I loved it. My husband had the pork tenderloin and one of the teens had the sea scallops and the rest of the table went prime rib. Everyone was very happy that night with their dinner choices and for dessert I chose the Esterhazy Cake because it mentioned almond meringue and I love almond dessert flavors. It was yummy and a good choice for me. Chocolate lovers would like the Sacher Torte and those at our table did! 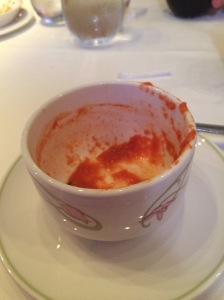 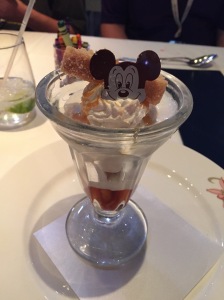 After dinner, a few of the group went to the 10:15 movie, “The Jungle Book” but I was being rocked to sleep. So, I went up to the adult only deck for a minute and watched the night waters and then turned in and slept so well it was like I was on vacation.

1 thought on “Trip Report Day 2: Get on the Ship and Get Yourself Ready for Some Fun and Some Tropical Drinks, Depressions and Sun.”