This is Part 2 of a 10 part series on the Disney Magic Mediterranean/Greek Isles cruise. For links to the rest of the trip report please visit here!

Today was a day at sea, so we decided to take advantage of having nowhere to be (this would not be the case for the next 5 days!) and slept in until 9:30. After taking our time getting ready we headed to Cabanas for breakfast. The food is a little bit different since there are different suppliers in the Mediterranean but it was still very good. I didn’t even care that the donuts weren’t Krispy Kreme!

Check out that view!

After breakfast we decided to do a little bit of shopping. I had no intention of buying anything, I just wanted to gather some ideas for later, but as I walked into one of the shops on deck 4 I spotted them. Animators’ Collection Elsa dolls. With zero hesitation I grabbed two, one we gave away on this blog a few weeks ago! Always thinking of the Dole Whippers, even when I’m on vacation ;).

I also picked up some adorable pins. I was looking forward to this since I had purchased one during my last cruise and loved it! These pins are sold by the register in black bags for only $2.95 with a minimum purchase of $30. Last time I got a Mickey anchor, this time I was lucky enough to get two different ones, a Dumbo and a Donald Duck!

Upon returning to our room we found out that we were locked out! Our view for the next hour while we waited to figure out what was wrong (the batteries in the card reader on the door had run out) and for the carpenter to fix it was this:

As soon as we got back into the room we got changed and headed for the adults only pool and pool bar! 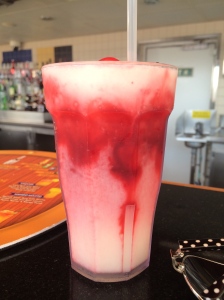 The temperature of the pool was perfect. Just cool enough to be refreshing but not unpleasant to get in to. Some liquid courage had Brent ready to try the Aqua Dunk. Me, not so much. Now if you don’t know, the Aqua Dunk is one of the water slides on the Disney Magic. This particular slide starts off with the floor dropping out from underneath you, then shoots you out over the side of the boat before coming to a stop. No thank you! Brent said it was an absolute blast though, and worth the short wait he’d endured on this sea day.

Checking on the time, I realized that we needed to head back to our stateroom to shower and get dressed if we wanted to make our meeting at Keys at 2:00. This was a prearranged meet up of people who had joined a Facebook group about this particular cruise. It was nice to put some names to faces at this event! Brent and I enjoyed a few drinks and some conversation before we decided we were very hungry and needed to head back to Cabanas for some lunch. I do wish we’d decided just a bit earlier that we wanted lunch, as then we would have been able to get something at one of the sit down restaurants instead of the buffet but oh well!

Since we’d been so late getting lunch by the time we wanted dessert they’d already starting putting it away, so we headed to Deck 9 to the self serve ice cream station. Over the course of this trip there were many different flavors of ice cream that were rotated every few days. I saw: mango, strawberry, blueberry and banana. Of course there was always chocolate and vanilla! They also had Mickey sprinkles and chocolate sauce to add to your ice cream if you so chose. 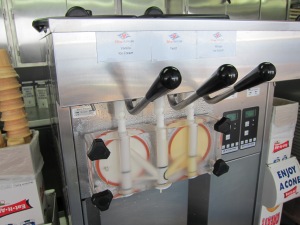 Following dessert we went back to our stateroom to read books out on our balcony. 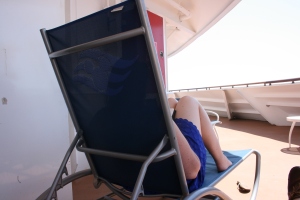 In what you’ll soon see develop into a theme 😉 we took a nap before it was time to get ready for formal night and the Captain’s Gala. We headed down to Deck 3 mid ship for one of the best parts of the Captain’s Gala: free drinks! The line to have your photo taken with the Captain was very long so we just enjoyed our drinks, then headed outside of Deck 4 to watch the sun set. 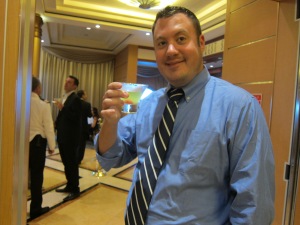 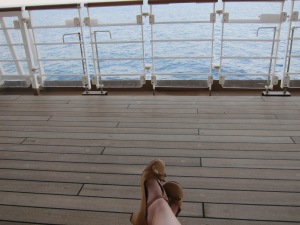 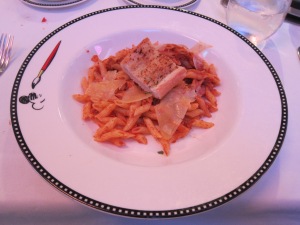 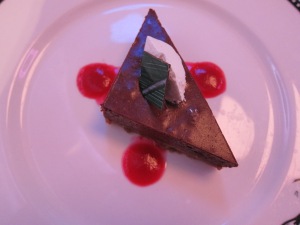 This night was “show” night at Animator’s Palate. I tried to take some photos but really none of them would have done the show any justice. The restaurant starts out black and white, with black and white drawings on the screens. As the meal goes on color starts being added and by dessert the whole restaurant is in full color (even the serving teams, who’d previously been wearing black and white) and there is a visit from Mickey himself! 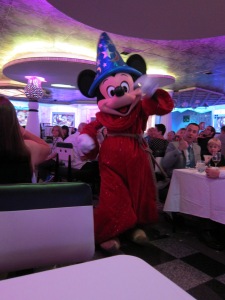 After dinner we made a quick dash to our stateroom to get changed out of our formal clothes. There was an adults only show at the Walt Disney theater, ventriloquist Paul Zerdin. It was so funny! We were glad we’d stayed up late to see it. Following the show we went straight to bed, since it was up early the next morning for an excursion. Tonight’s towel animal was one of my favorites, an elephant. Our stateroom host Jojo had even used my sunglasses for the elephants eyes! Love it.

Up next, our first port day: Katakolon/Olympia, Greece!