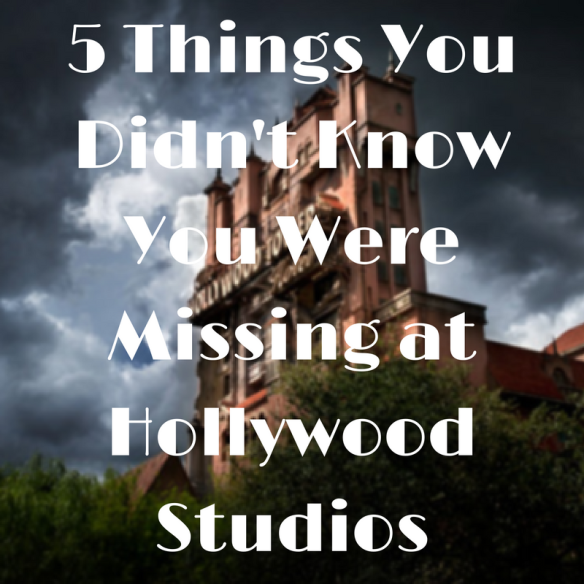 In the last installment of this series, we’re going to cover Disney’s Hollywood Studios.  This park is in a bit of a transitional phase right now with the construction of the new “lands”, but there are still some things that you might not notice.

Character Palooza – It doesn’t happen often, but once in a while, lots of characters from “Fantasmic” get together and mingle for 20-30 minutes with no lines.  They just sort of walk around and interact with everyone.  This is great for seeing some hard to find characters.

Citizens of Hollywood – These folks make up an improv group that sort of mingles with the crowd and interacts with them as well as doing some skits.  Find them on Sunset or Hollywood Boulevards.  They’re usually dressed like workers, police officers, directors, aspiring actors.  They’re a lot of fun so don’t miss them!

MuppetVision 3D – Now, I know this attraction has been around for a long, long time, and hasn’t changed much but don’t discount it. There are tons of little jokes throughout.  In the queue, right underneath the sign that says “Back in 5 minutes” you can see a welcome mat.  Lift it and find a key underneath.  Inside the waiting area, hanging from the ceiling is a net filled with Jello cubes.  It’s a play on words for Annette Funicello – a net fulla jello…get it?  A lot of these you will probably have to explain to your kids but even though this attraction is old, it’s still really fun!

PB& J milkshake – Even if you don’t have reservations at 50’s Prime Time, you can go into the bar and order one to go.  This is a favorite of Dole Whipped!

Carrot Cake Cookie – Used to be at Writer’s Stop, now at Beverly Sunset.  They are delicious, try one!