Sadly, I can not be at Disney World or Disneyland or on a Disney Cruise every single day. I have tried to mastermind a way to make this all happen but I have failed. So, what to do? Well, tour other places and COMPARE it to Disney.

I was hosting some friends at our home in Atlanta and we did several days of touristy Atlanta things and I wanted to tell you if you find yourself in Atlanta and need some touristy things to do head downtown to the area where World of Coke and the Aquarium amongst other things are housed.

that day, “I think Imagineers must have helped design this space.” It was mostly a self-guided tour (which I prefer) and there were several different rooms that you could choose to walk through or skip. There was a history of Coke type room and also the Vault room – which was very popular! The Vault room houses a large vault that contains the only written recipe of Coke. There was a 4D movie that makes :It’s Tough to be a Bug” seem very mellow and honestly, there was so much shake, rattle and roll that I did not love the movie so much. What I did love was the art designed coke bottles that were displayed in the middle atrium. They were designed from each country to represent their country and then larger ones were designed to just be art and pretty. I loved it. 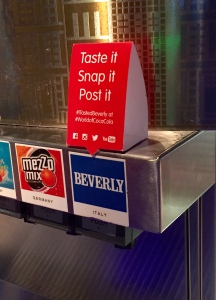 Another favorite room was the tasting room. Oh yes, your beloved Beverly has another home in the US and that is in the tasting room in the World of Coke. The best part is most people there are unknowing about the whole Beverly craze and so everyone was wondering (at first) what the big deal was because Coke had made it known it was special!

After seeing advertising over the ages and finding out why the Polar Bear was sitting for pictures (he was tired) it was time to exit via the Coke Store (again Disney?) and buy a few Coke branded products we would never use (tell me again why a 15 year old needs an egg timer?).

The next day after having such a positive experience in the World of Coke we headed over to the Atlanta Aquarium, one of the largest in the World. The Aquarium is another area that is well done, similar to Disney except for one LARGE reason, the Dolphin show. But before we get there, quick review on the rest of it!

The Ocean Voyager section has the aquarium tunnel that you walk through and see Whale Sharks and Manta Rays swimming all around you. There were several divers in the tanks that would interact with people and take pictures. At the end of the walk through there was a huge aquarium wall and you could sit in the room and watch the whale sharks, fish and manta rays. I could have watched for hours. There also was a question and answer with one of the head divers and that was extremely interesting.

After the exhibits we grabbed lunch there, which I was pleasantly surprised. For a tourist place I found the food good and the cost reasonable. We had BBQ, mac and cheese, potato salad, and corn bread all for about $10. There were many options and everyone had something they really enjoyed.

The dolphin show “Dolphin Tales” was scheduled for 1;30pm and so about 1:15 we headed over to the theater. We had no idea what to expect but having seen dolphin shows before we thought it would be entertaining and show what the dolphins could do and be informative but fun. We walked into a massive theater that was 90% full and though we could not find seats together for all 5 of us, we did find what seemed like the last 5 seats

within a few rows. I was sitting on the front row to the far side near the exit. They did announce that if you were in the first 10 rows you would/could get wet and if you liked your hair do that day you may want to move, etc. It was sort of a joke type announcement. If I knew what was about to happen I would have chosen not to see the show or would have done something different. Here is my review of the show separate from the water. It was a musical and not a Dolphin show. The dolphins were basically extras that were not the main focus and only on “stage” about 5 minutes of the 35 minute show. The singer was okay that told the story but the show was “over the top” and not appropriate for an educational type aquarium. I would have expected to see that show in Reno (not even Vegas) and on a lower tier cruise ship. It was so odd considering how great the rest of the aquarium was and it just did not fit. The other thing is the amount of water and splashing. There was a lot of water and splashing overall but during one portion of the show the dolphins came out and were splashing the front, middle row a ton of water. The first time it was a bit funny but then that portion continued around 7-8 more times and it was just too much. They did continue around to my side and splashed us once and I can tell you I was completely soaked from just 1 time and had salt water in my eyes and also it ruined (misshapened) my dress. I was fine with all that but seeing the young kids crying and upset, from especially the middle section, just took a little away from the day. We are easy going people so we just moved on but truly I am shocked that they first can “get away” with a constant barrage of salt water into infants eyes (seriously) and also when the show ends the steel riser stairs and painted concrete walkway are soaked and it seems dangerous and slippery. Anyway, the aquarium would have rated perfect if not for that. The show is just not a good fit.

But skip the show and visit the exhibits and eat some yummy lunch and you will be happy. Oh, and do not forget the gift shop because they do have some cute things.