Love is in the air! Today I had the honor of interviewing one of my best friends on her amazing 2011 Walt Disney World engagement. Jeannine has been a Disneyphile since she was a young child and enjoyed regular trips with her family. She was able to convert her now-husband Vinny easily after their very first trip together to Walt Disney World. Soon Jeannine and Vinny were enjoying regular trips to the World, but this trip in 2011 was just a little bit different! Here is their engagement story and then some questions and answers directly from the bride.

Early on the morning of December 3, 2011, Jeannine and Vinny flew from Boston to Orlando for their stay at Disney’s Port Orleans Riverside resort. They spent the afternoon shopping at Downtown Disney, where Vinny was feeling particularly generous and kept offering to buy anything Jeannine’s heart desired. Jeannine says in hindsight this was her first (but not only!) hint about what was going to happen on this trip. The hints kept on coming when they headed back to their resort to get changed for dinner and night-touring at the Magic Kingdom. Vinny came out of the bathroom dressed in nicer clothing than usual, and urged Jeannine to change into something other than her usual attire of yoga pants. She declined, not knowing what was to come. At the Magic Kingdom they rode some rides, where Vinny always placed Jeannine on his left which was later explained by the fact that he had the ring in his right pocket. I can’t imagine walking around the Magic Kingdom with such a precious and priceless item in your pocket. I don’t know how Vinny did it without passing out!

Finally they headed to Cinderella’s Royal Table where Vinny had pulled some strings and changed their 5:30pm reservation to 9:15pm to coincide with the evening’s fireworks show. This was another very big hint that Jeannine had explained away (because any regular Walt Disney World visitor knows you can’t just “change” your Cinderella’s Royal Table reservation at will… especially not to fireworks time). Though she did become suspicious upon being seated at a window front table, wondering exactly what Vinny had done to score that prime seating. Jeannine and Vinny were lucky enough to be waited on by Jay, a waited with whom they’d been seated twice in the past (and, spoiler alert!) would later be seated with on their honeymoon when they ate again at Cinderella’s Royal Table. Disney magic! Vinny barely ate his dinner, but Jeannine helped him out, clearly not feeling the nerves that he was at the time. The princesses were making their way around the restaurant but soon that stopped, the lighting went down and music began to play for the Wishes fireworks show. 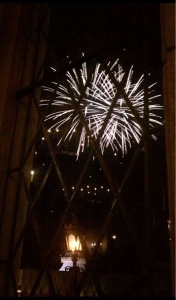 Immediately after the fireworks ended Jay delivered a white dessert plate with a cover, which Jeannine didn’t see coming but she DID hear a gasp from a nearby table. When she turned she saw Jay delivering a white dessert plate… only they hadn’t ordered dessert! The plate held a glass slipper and a gorgeous engagement ring. Vinny slipped Jay the ring during one of Jeannine’s dinner restroom breaks so it was all set and done perfectly. Jeannine turned back and Vinny was on one knee. Things around them got very loud as people were cheering and a PhotoPass photographer had appeared to capture the moment. It was so loud, in fact, that neither Jeannine nor Vinny are sure he actually asked her to marry him OR if she said yes. Regardless and most importantly Jeannine ended up with a ring on her finger and they were engaged!

“Real” dessert and two champagne flutes were delivered to the table and Ariel came over to take a celebratory photo with the couple. The PhotoPass photographer did some posed photos of Jeannine and Vinny and her new bling. While the photos were being taken, Cast members at Cinderella’s Royal Table took their champagne flutes and the glass slipper to wrap them up securely for them to take home and keep forever. The cast members at Cinderella’s Royal Table also delivered two of the coveted “Just Engaged” buttons for them to wear around the parks for the rest of their trip. At the end (or beginning) Jeannine and Vinny headed into the parks to start their happily ever after! 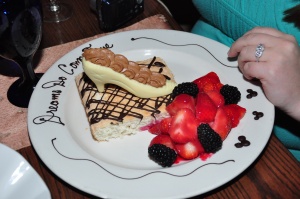 What did you do after you got engaged, anything special to celebrate?

“The first thing we did was ride Haunted Mansion, it’s Vinny’s favorite! We then spent the next 4 days at Disney World, where we got tons of special attention (free ice creams, better seating for shows, go to the FastPass line even though we didn’t have the passes), At the end of the 4 days we boarded the Disney Dream for our very first cruise.”

Did you buy anything to commemorate the occasion?

“We got a “Just Engaged” ornament at the Magic Kingdom, which Disney personalized with our names and the date for free. Also when we went back to our room we discovered that Disney sent a congratulations card to our room.” (Note from Jamie: Jeannine collects ornaments from Disney, so this came as no surprise to me! She has an amazing collection)

How did Vinny set up the engagement?

“Vinny got in touch with Disney’s Fairytale Weddings & Honeymoons who helped him set everything up. They were the ones who changed our dining reservation time, had the glass slipper made and personalized for us, and set up the PhotoPass person to be there for the moment. There was a fee for their services, but they were there to help Vinny every step of the way!”

What made Vinny choose Disney?

Did you research Disney weddings?

“Yes, when we got home. We did end up having our wedding closer to home because of family. But we immediately got started planning our two week Walt Disney World and Disney Cruise Line honeymoon!”

What would you recommend to other people planning a Disney World engagement?

“Get in touch with Disney Fairytale Weddings & Honeymoons! They’ll help you personalize it and make it special for both of you. Oh, and make sure to get your “Just Engaged” buttons and add your engagement celebration to any dining reservations you have planned for the rest of the trip!”

Thanks so much for sharing with us, Jeannine! If you have stories of your own Disney engagement or honeymoon, or are simply dreaming of these things we’d LOVE to hear  about it! Tell us in the comments section here or head to our Facebook page!

Dreaming of your OWN Disney proposal? We’ve got the link for you! Head to Disney Weddings and submit a video telling them why you and your significant other deserve a dream Disney proposal.  One winner will receive a five day, four night trip to either the Walt Disney World Resort or Disneyland Resort, tickets to the Park and a Disney’s Fairy Tale Weddings “proposal package” including the help of an engagement planner to create and execute a custom surprise proposal! 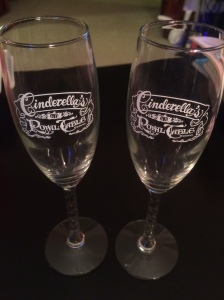 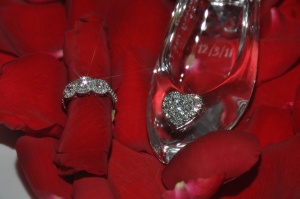 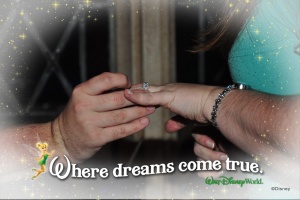