In our continuing series on where to find a quick meal at Walt Disney World that doesn’t involve a burger and french fries, today we’re going to take a look at Hollywood Studios! Hollywood Studios is notorious for their lack of quality counter service food options, but I still think we found several options that will satisfy most guests!

1) As long as you’re not looking for healthy fare you should hit up Min and Bill’s Dockside Diner! A longstanding favorite at Hollywood Studios is their frankfurter in a pretzel roll. Early in December Min and Bill’s also added two different kinds of macaroni and cheese: buffalo chicken and pulled pork. The pulled pork has received some great reviews, and I think it’s worth a shot if you’re looking for something a little different for lunch!

2) Also well reviewed for lunch at Hollywood Studios is Starring Rolls Cafe. While the menu isn’t vast, the choices of ham or turkey sandwich are both served stuffed full of lunchmeat on fresh rolls and are very good! The “star” of the Starting Rolls Cafe, though, is the cupcakes. These cupcakes are gigantic, and incredibly decadent. Not to be missed!

3) Backlot Express. Ok, so this one is cheating a little bit! My former favorite meal here, the buffalo chicken sandwich, has been replaced by buffalo chicken nuggets. For a meal that is pretty typical, it’s actually really quite good! I wish they’d bring back the sandwich, but the nuggets are a decent substitute… and they’re still not a burger (though there are fries 😉 ) 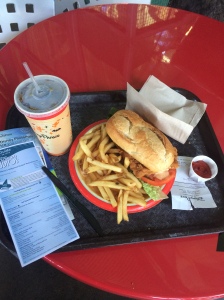 Other choices at Hollywood Studios include ABC Commissary (I did not enjoy my meal here, but heard there have been improvements lately, so it may be worth another try) and Fairfax Fare (the barbecue choices are decent).