On March 9th, 2014 Disney debuted a brand new parade, the Festival of Fantasy Parade in the Magic Kingdom at Walt Disney World. The parade starts at 3:00pm in Frontierland and ends near the Fire Hall on Main Street USA, taking a path through Liberty Square, around the Hub and down Main Street USA. I found a spot near the train station towards the end of the parade route which means the parade didn’t get to my location until closer to 3:20pm.

There are plenty of great places to see the parade, it will be less crowded in Frontierland and Liberty Square as well as near the train station. The busiest places to watch will be near the Hub (the circular area near Cinderella castle) and all down Main Street USA. If you want to get a prime viewing spot make sure you are in a spot about a half hour before the parade or earlier if you plan to be at the Hub. 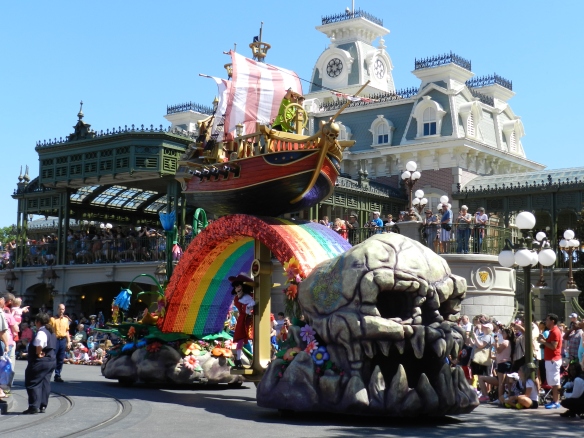 But what is the parade all about? According to Disney’s website “Celebrate the stories you know and love in a whole new way with a magical mix of innovative floats, vibrant costumes and original music. Paying homage to the unbridled magic and vivid pageantry of Fantasyland and its many inhabitants.”   This parade is really living up to its hype. It is colorful, vibrant, high energy, and visual appealing. The costumes are amazing, the floats are gorgeous and the music is perfect for the parade.

The floats feature first, Belle and the Beast along with Cinderella and Prince Charming, Tiana and Naveen, Anna and Elsa. Next is Rapunzel with Flynn Rider and some of the patrons of the Ugly Duckling, swinging their way down the parade path. Ariel follows next in her clamshell. After Ariel is my personal favorite, Peter Pan. Peter Pan and Wendy are in a ship perched on a rainbow held up by skull rock. Underneath the rainbow is Captain Hook on an anchor, followed by Tinker Bell on the back of the float. That float is followed by the Tick Tock Croc.

Next we see Merida riding a set of bagpipes and accompanied by some kilted lasses and laddies. The most talked about float is next Maleficent as the Dragon. The dragon breathes fire and is distinctly steampunk inspired. This is accompanied by Prince Phillip fighting the thorns and the three fairies. Snow white and her dwarves follow the dragon on foot. The last large float is Pinocchio, Donald and Daisy Duck, Pluto, and Goofy. And of course in the last float a hot air balloon is the big cheese himself, Mickey Mouse with Minnie Mouse.

This parade is a must do! If you don’t normally watch the parade you might want to change your mind. This will appeal to kids of all ages and of course adults too.